Tracelogger is a tool to create traces of the JS engine to investigate or visualize performance issues in SpiderMonkey. Steve Fink has recently been using it to dive into google docs performance and has been hitting some road blocks. The UI became unresponsive and crashing the browser wasn’t uncommon. This is unacceptable and it urged me to improve the performance!

I looked at the generated log files which were not unacceptable large. The log itself contained 3 million logged items, while I was able to visualize 12 million logged items. The cheer number of logged items was not the cause. I knew that creating the fancy graphs were also not the problem. They have been optimized quite heavily already. That only left the overview as a possible problem.

The overview pane gives an overview of the engines / sub parts we spend time in. Beneath it we see the same, but for the scripts. The computation of this runs in a web worker to not make the browser unresponsive. Once in a while the worker gives back the partial result which the browser renders.

The issue was in the rendering of the partial result. We update this table every time the worker has finished a chunk. Generating the table is generally fast for the workloads I was testing, since there weren’t a lot of different scripts. Though running the full browser gave a lot of different scripts. As a result updating the table became a big overhead. Also you need to know this could happen every 1ms.

The first fix was to make sure we only update this table every 100ms. This is a nice trade-off between seeing the newest information and not making the browser unresponsive. This resulted in far fewer calls to update the table. Up to 100x less.

The next thing I did was to delay the creation of the table. Instead of creating a table it now shows a textual representation of the data. Only upon when the computation is complete it will show the sortable table. This was 10x to 100x faster. 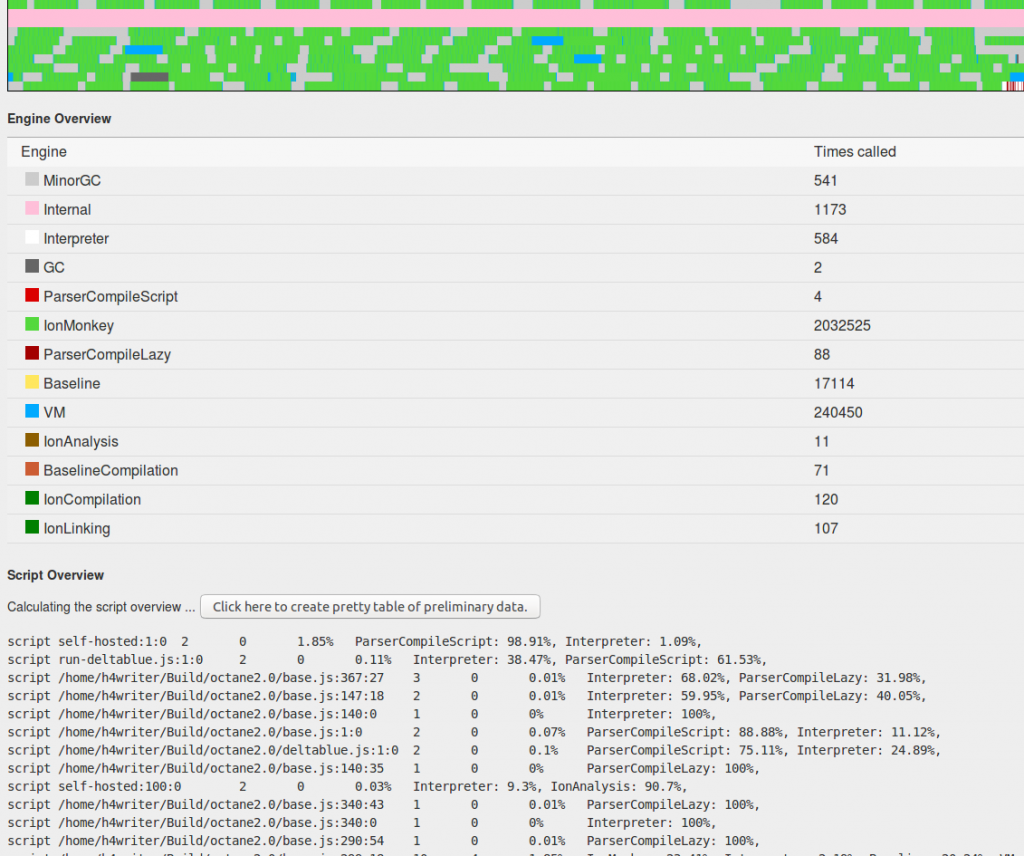 Lastly I also fixed a memory issue. A tracelog log is a tree of where time is spend. This is parsed breadth-first. That is better since it will give a quite good representation quite quickly, even if all the small logged items are not processed yet. But this means the UI needs to keep track of which items will get processed in the next round. This list of items could get unwieldy large. This is now solved by switching to dept-first traversal when that happens. Dept-first traversal needs no additional state to traverse the tree. In my testcase it previously went to 2gb and crashed. With this change the maximum needed memory I saw was 1.2gb and no crash.

Everything has landed in the github repo. Everybody using the tracelogger is advised to pull the newest version and experience the improved performance. As always feel free to report new issues or to contribute in making tracelogger even better.